VtS: a Quest for Power

In continuation from Friday's post, I would like to investigate how high-level GLOG PCs should be able to acquire amazing capabilities and arcane secrets, such as the fabled fireball spell. It is generally agreed that parties should be able to acquire great power at great cost, to go on a quest to prove their worth. But guidelines are often sparse. Here, then, is my method. It focuses on supernatural acquisition, since physical training and intellectual exercise is already understood and usually are boring focuses for games.

This should not be a downtime activity. It should be easy for players to say "I want to do X," and have a way to learn how. Perhaps the consultation of sages, libraries, or signs can be a generic method for learning specific steps towards their goal. The ultimate quest should be difficult, something that a PC with less than 4 levels should hesitate to attempt.

Let us consider fictional examples for the acquisition of supernatural power: 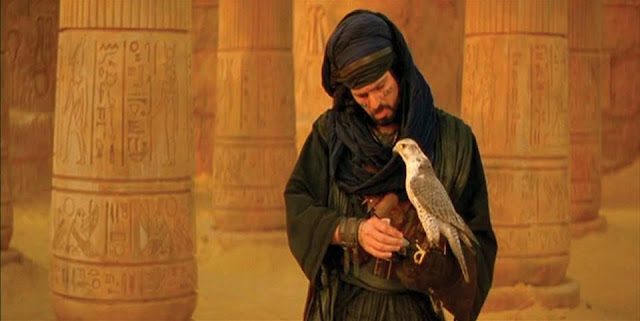 So the players determine an ambition (find clues alluding to one by the DM) and consult a source of information. If the source is good, it can provide enough information for the PCs to know what they need to do to acquire the power. If the source is good and specific to the ambition in question, they may also learn dangerous and specific features of the method and power.

Roll 1d4+2 steps on the table below to inspire the specific quest. With fewer steps, make each more exacting or difficult. Players need a specific artifact, not one of many.

d10 steps on the path of ambition

Example: Quest for the Fireball

The players wish to learn how to cast the fabled fireball spell. I roll a d4 and get a 1, so I roll three times on the table. I roll a 1, 4, and 2, so the steps to throw fireballs are to acquire an item that will guide you to a sacred guardian you must defeat so you can acquire the item which will allow you to perform the ultimate ritual.

I think I want the final item to open a small portal to the Elemental Plane of Fire in your heart, granting you the power to summon vast flames at will. Since I'm embroiled in a love affair with orbs, let's say its the Orb of Jetraeas, created by a short-lived religious revolutionary. The Orb is made of obsidian, giving off warmth and light.

To acquire this orb, you first have to defeat a sacred guardian. But we don't want the guardian to just be carrying it. That turns two challenges into one. So we'll say that the Orb of Jetraeas was placed in an active volcano, impossible to reach, but by killing the volcano's spirit you can cool the magma enough to approach, but not so much that there is no risk.

In order to defeat the volcano's spirit, you must acquire the item that will allow you to perform the correct rite. So the spirit is not just lurking in a karst waiting to be randomly encountered. Let's say that this volcano was the site of an ancient battle, and that the spirit promised to return to defend against those invaders again. So if you acquire the ancient armor of those invaders and approach the volcano offering challenge, that will be enough to summon it.

Strew that armor through a nearby dungeon, prepare encounters for travel to the volcano, and introduce social complications, and you've got a quest for power worthy of its reward.
Posted by Phlox at 8/02/2020