Please enjoy this dungeon space, the smuggling den of a clique of wererats and their mutoid allies. It features more traps than I typically employ, as well as a well-Jacquaysed layout

When a magician lingers in their tower, studying spells, they are essentially studying magic tricks. Figuring out how to turn sticks into snakes is like a life hack. It's like getting really good at throwing a water bottle so it does a backflip and land standing up. The defining feature of the magician is that they know how to twist their brains in ways that make them good at holding these weird skills in their minds. 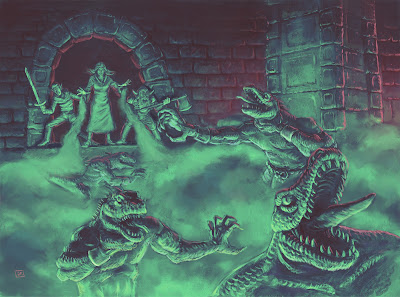 In the past, I've been a bit loosey-goosey with the exact in-the-moment requirements of spells. I was keen to ask players "what does it look like when you cast your magic missile? What do you do to cast it?" People were often confused, or at least imagined different spell-casting tropes than I did. To eliminate future confusion in my games, I've tried to write out my feelings on spell component requirements.

In order for these guidelines to be useful, they need to be intuitive. I should be able to retroactively apply them when the PCs find a scroll of some spell in a module I wrote years ago, and they should apply to spells that PCs create themselves, which is really an under-explored process in the games I run. I like the idea of there being largely redundant versions of similar spells, which pose all the more reason to include a spell creator's name in the spell itself. A pair of wizard's apprentices may argue the merits of Mordenkainen's Faithful Hound and Lian Yimu's Silent Hound spells. All the better when Mordenkainen is a PC of a previous campaign and Lian Yimu is an important NPC

What does it look like to cast a spell? Does it require a free hand? An invocation? I like to let the intended effect guide me. What mundane action can I imagine is getting extended into something magical? Is someone throwing a fireball at me? Are they staring at me with so much hateful concentration that a fireball is coming out of them? If they're casting a summoning spell they've got to be verbally calling, just like mom used to call me to dinner, right?

Generally, a spell will require at least one of these conditions:

For each condition beyond the first that the spell's creator wishes to employ, it should have a +10% chance of getting successfully researched, or go 10% faster or be 10% cheaper, depending on how that procedure works. The DM should reject proposals that feel too contrived.
Posted by Phlox at 5/23/2022 No comments:

A lot of good monsters in stories and games are those that are easy to grasp. They have striking concepts, even when they lack total coherence. Medusa (if we want to call her a monster) has snakes for hair and turns people into stone. Iconic. The connection between snake hair and petrification could be posited, but is actually unnecessary. A manticore has the head of a man, the body of a lion, and the tail of a scorpion. It’s clear why it’s scary and we can guess how it acts because we know what a man, a lion, and a scorpion are.

Unknowable monsters are uninteresting on their own. They need a good story to go into. But a cowardly little guy with a dog face and scales makes for a good story all on his own.

Usually a good monster is pretty simple, but a major exception is the “Weird Guy” category. Your vampire, your wizard, your cat lord. They often have a loose theme under which they may have a dozen or more features and quirks. But note how many of those features are themselves striking and simple. Dracula can turn into a bat (and we know what bats are), drink blood (and we have strong associations with blood), hypnotize people, command wolves, climb walls like a lizard, get burned by crosses, flee the sun, be unkillable, and other things you don’t need to explain.

13. one thing divided in two

14. one thing inside another

15. one thing entwined with another

20. one thing through another thing