If you talk to BX/OSE afficianados, they will justify the maligned thief abilities in a variety of ways, ways that I sort of doubt are totally clear in the text but which nevertheless are the best version of the rules as I see them. They might assign competency to the thief such that they succeed on all basic applications of the skill and only need to roll sometimes, or emphasize the near-supernatural nature of even a level 1 apprentice. Even in this best-articulated framework, it can be tricky to determine how to approach a thief-adjacent activity which is attempted both by thieves and members of more square classes. For instance, if the party is climbing a non-sheer surface under time pressure, how should it be run? For this there are many answers.

But it's sort of weird! Sometimes we say "the thief is better than other classes at certain things," make a procedure for how thieves do it, then improvise from that procedure to determine the worse way the fighter does it. But a lot of these activities are pretty common for an adventure! Maybe the basic procedure should be the non-thief one, and thieves can just get some bonus.

I have a way of doing thief skills that entails more "spot rules" for the thief class, but that I argue may be better integrated into the game procedures in general. For each, I looked at the way a non-thief might do them on the OSE SRD, and assigned a bonus that I thought appropriate.

In coming up with a homebrew rule for thief skills, I am following in the footsteps of many. This proposal is untested, but I think it's a viable direction to take.

* Climb sheer surfaces (CS): A dexterity ability check is required for each 100’ to be climbed, made with a +4 bonus if the climb is any easier than sheer. If the roll fails, the thief falls at the halfway point, suffering falling damage.

[Notes: while ability checks are an optional rule in OSE, the procedure for climbing does in fact call for one, so I thought it would be appropriate to do so here as well.]

* Find or remove treasure traps (TR): When actively searching for traps, the trap’s activation chance is reduced by 1, even reducing traps that always activate to a 5-in-6 chance. An actively searching thief notices when a trap would have triggered.

* Hear noise (HN): In a quiet environment (e.g. not in combat), a thief may attempt to listen at a door or to hear the sounds of something (e.g. a wandering monster) approaching, with pinpoint accuracy on a 2-in-6 chance.

* Hide in shadows (HS): When not directly illuminated, you can remain motionless. No one who knows where you are can detect you from more than 5 feet away until you move or speak.

[Note: this one required more direct innovation. The ability to be unseen as long as one is completely still has come up in several GLoG games, and always requires more creativitiy than one might expect.]

* Move silently (MS): A thief moving carefully alone gets +2 to their encounter surprise chances. Groups composed entirely of thieves get the same bonus.

* Open locks (OL): Requires thieves’ tools. The thief may make an Open Stuck Doors check on a lock, modified by dex instead of str. If used on a locked door, it does not eliminate the chance of surprise. A thief can only try this once per lock per level.

* Pick pockets (PP): Used against an unaware or friendly target. Make an attack roll, using the +4 backstab bonus if the target is unaware. On a hit, instead of damage take an object that would be feasible to steal, up to a sheathed weapon or worn bracelet. If a particular item is known, the thief can take it. Otherwise, the DM selects a likely object or rolls on a table, such as this:

[Note: obviously this one also required innovation. Really, how often do PCs pick pockets? It's a high-risk gambit that often has a high penalty for failure, and most foes either carry nothing interesting or are about to die anyway.]
Posted by Phlox at 8/30/2022 No comments:

Who Would be at the Expense of Two? (GLoG Class: Binder) (😈)

Having cut my teeth on D&D 3.5, I always wanted to reproduce the binder class, which had a great feel to it, if flawed in execution. Fifth edition's warlock class seemed like a nice step in that direction, but I don't especially care for that ruleset, so I've tried my hand at a class in the GLoG style. I think this could be adapted to B/X pretty easily, giving it the dwarf XP advancement, +1 spirit every other level, saves as a magic-user, and proficiencies of a thief.

Decency: You start with an extra primary attribute, Decency. It's generated like your other attributes, but you get a -1 upon taking your first Binder level. Binders can sell (or, rarely, wager) slivers of Decency to their patron in exchange for favors. In order to level up, a Binder with enough XP must complete a gross or violent ritual set by their patron, which also subtracts 1 from their decency score. If a Binder is dying or if they attempt to give up binding, they must roll under their Decency on a d20 or get torn apart by invisible demons.

Patron: A demon with a strange form that teaches the Binder its knowledge. This immortal creature can be summoned by inscribing its sigil, typically in a chalk and candle circle. As a complimentary service, the patron can teach the liberal arts and astronomy, as well as Latin, Greek, and Hebrew. It will fight for the Binder only if paid in acts degrading Decency.

Pitch: Upon encountering a ghost or similar creature, you can add them to your Acquaintance of Spirits if you can get their agreement. If you encounter a demon, you can switch to have them as your Patron. They may offer incentives to do so, depending on their reaction roll with your current patron. Switching Patrons always involves a ritual costing 1 Decency.

Spirits: Each day, you may wheedle and finagle with your patron to get the services of a number of Spirits in your Acquaintance equal to your binder level. Your Acquaintance of Spirits includes three of the famous ones (see Example Spirits below) and any you acquire in play. When using a spirit for a task that's within their specialty, they will almost alway succeed. For each major favor the spirit does, your patron has a 50% chance of deciding that they've helped you enough, and you can't call that spirit back up that day. Only one Spirit may be in active service at a given time. Spirits cannot be called up on hallowed ground and they cannot penetrate iron, holy symbols, or asbestos. The definition of "each day" is interpreted in the least-convenient way unless agreed upon between the patron and the binder.

Ventriloquy: Your spirits can enter your body, and make you seem to be the source of whatever they are doing.

Officiously to Keep Alive: When in close contact with a dying creature, you can set a Memorandum on their spirit. When they die, their Spirit is added to your Acquiantance, with no consent required.

Chorus: You can have any number of Spirits in service at a given time, up to your per-day limit.

Example Spirits
These should be given names and deeds specific to your game-world. Examples from Earth history and myth are included.

Some Artifacts used by Secret Societies
Posted by Phlox at 8/08/2022 2 comments:

A collection of half-formed ideas inspired by a recent return to the beloved game of dungeoneering and overland travel. Half-way to a list of Cheap Tricks. 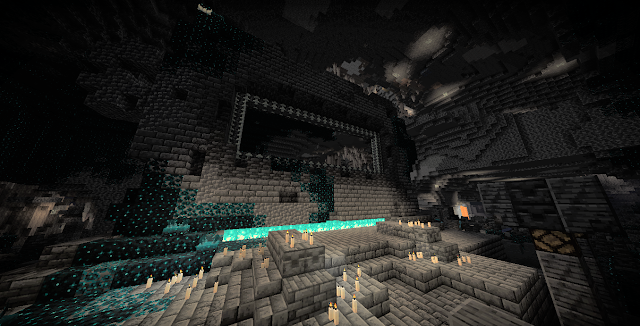 2. Herobrine, a creepypasta encounter. Secretive, perhaps dead, adventurer who watches from fog. PCs find plenty of evidence that he's been around. God's dead brother? Cyphers in his writing try to get the players (not PCs 👻) to stop playing.

4. Having one monster riding another creates a natural, interesting relationship between them that is relevant in and out of combat.

5. A wall you have to break through to progress, but if you do so all the monsters are let out.

6. If you die, your secondary PC gets one chance to sally forth to try to rescue you, or at least your supplies. Tarry too long and the imperiled PC despawns.

7. New monster
This creature has four short legs, despite having the height and width of a humanoid. Some say it is the result of a wizard’s attempt to recreate a pig.

Silent: Surprises on a 3-in-6 chance.
Explosive: Upon first coming within 30 feet of an enemy, the creature will loudly hiss, then at the end of its next turn explode for 3d6 damage, save vs breathe halves. This explosion afflicts all creatures and unattended objects in a 30’ radius.
Charge: If the creature would be damaged by lightning or electricity, it instead glows with a blue static charge for 1d4 hours, during which time its speed is increased to 120’ (40’) and its explosion damage increases to 3d8.
Fears cats: Will not approach felines or groups with felines.

8. Making armor and tools out of diamonds is tight.

9. PCs return to their stronghold to find that other adventurers have messed around with their items and built ugly piles of dirt.

10. TNT and dynamite is too cool a tool to deprive the PCs of.

11. Rails and minecarts. More generally, the ability for a party to make travel through a thoroughly cleared-out area faster.

12. Some monsters should have mechanistic, easily predictable actions. Allow clever players to solve some of a regions encounters permanently.

15. Fireworks-- let people have them! This is like the TNT thing. It's exactly the sort of cockamamie item that players will set to some unlikely use.

16. In old Minecraft, each kind of food healed a certain amount of HP. This could be a simple way to track ration use and introduce a small but impactful way to track food and rest. It's also reminiscent of Fighting Fantasy's provisions, which to me is a plus.

17. In new Minecraft, you can find treasure maps in sunken ships and other places. Maps to treasure that require nothing more complicated than a short hexcrawl are such an efficient boon for OSR games, and also just whip ass. Children know that treasure maps are cool, without needing to come up with some gimmick or scenario, and I beg you to remember it too.

18. Mingled dungeon-wilderness-domain gameplay from the beginning.

19. Dungeon biomes. New Minecraft introduces lush caves, dripping caverns, the "deep dark", and ancient abandoned cities that create an effective vibe. Often all it takes is a few different objects and substances, repeated liberally, and an encounter table to handle the rest.