Notes on Gardens of Ynn

The Gardens of Ynn is a delightful procedural pointcrawl, written by the talented Emmy Allen. I was fortunate enough to receive two copies as a gift from friends and family, and I inaugurated a session yesterday.

This is not a review in full. Instead, I will just note some thoughts, including tweaks I will make the next time I run the Gardens. 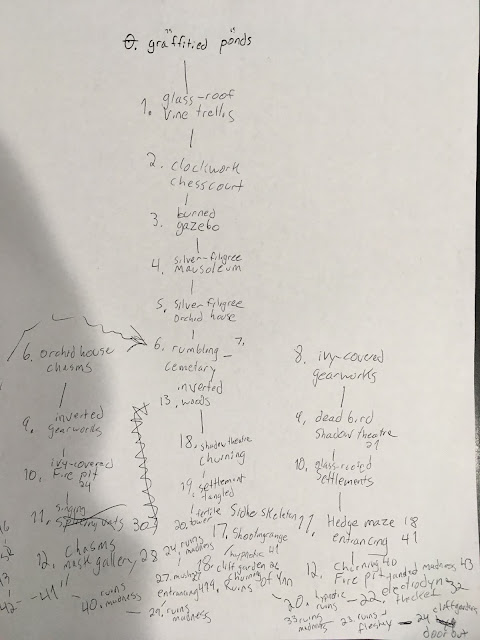 Email ThisBlogThis!Share to TwitterShare to FacebookShare to Pinterest
Labels: gardens of ynn, spells

I've been reading the Memoirs of Usama Ibn-Munqidh, translated by Philip K. Hitti. The memoirs provide the fascinating perspective of a Syrian poet reminiscing on his escapades around the time of the First Crusade. It is unclear how much of the memoirs are dramatized false memories, but it is fair to say that much of what Usama describes is influenced by his central belief that fate offers dramatic reversal of fortune. For instance, there is a passage that describes a grievous wound a horse receives and shrugs off, followed by one describing a horse who is killed by a minor scratch.

In other passages, we learn that if a man can still bite, his head injury is nonfatal; that striking an apostate with a sword just might invert his eyelids; that a clan of Arabs called the Banu-Ubayy eats only dead animals, don't contract diseases, and eat their guests. There are also many sections that describe loot acquired in this tumultuous time:
d18 Plunder of an Arab-Syrian Gentleman

d8 Adventure Hooks for an Arab-Syrian Gentleman
Posted by Phlox at 12/29/2019 No comments: