Exercising the old brain-muscles with a short scenario. This is meant to take place over a few months of downtime, perhaps while the player characters are pursuing their own domestic projects. The structure of the scenario involves two sets of progression: one is time and the other is escalation. If the PCs don't interact much with events, they will eventually become unavoidable. If they brutishly slay their way through the initial stages, matters will escalate. I also want to practice building in the potential for catastrophe.

A stranger came to your island in the latter days of the winter, not noble or wealthy but with a strange assurance of import. A magician, some said. A refutionary, he said-- someone hired to defend someone in legal disputes. He says he is a Canuanite, and that's why his law is not our law.

If a player character is a person of repute, he will beg their hospitality for the year. If they refuse, he will find hospitality from another house or live in the wilds, and the PC's business enterprises will suffer a divinely-ordained freak accident. (Socu-worshipers are pretty much obliged to oblige him.) 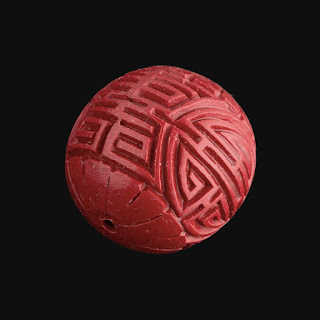 Come spring, strange folk will come to the island, having chartered the skimp Storm's Eye. Their skin is the pallor of ash, they wear dark robes, and their intense mien is unlike any found in known society. They announce every movement before them make them, and are clumsy, yet the cloy of magic is heavy on them. They seek the refutionary, offering payment to those who assist them. If the refutionary is a PC's guest, he will beg sanctuary against them, claiming they seek an item in his rightful possession. If asked why they seek him, they claim he stole an article of their faith. Both parties will be as vague as possible.

The object is the Eye of Aygerim, a ball of cinnabar that the refutionary inherited from his mother. He is aware that it can be used to occult objects, hiding them to be retrieved later. It essentially functions like a bag of holding, if a bag of holding sent your gear to god's storeroom for the endtimes. He does not know that it contains a trapped giant, Körwşi, who will be freed if the orb is broken open.

Come summer, a sinkhole tears apart a shepherd's field (temporarily imperiling a pair of adorable sheep.) Below is a heretofore unknown complex, and won't someone go down there and check it out? Even if the PCs don't want to enter this spooky dungeon, ask if they want to play the 0-level gravediggers and clowns that get stuck with it.

This "complex" was an ancient headwoman's hall, its semi-labyrinthine layout a result of inferior architectural methods requiring many load-bearing walls. (For layout, overcomplicate a map of a a PC's or player's home.) Fossilized wooden beams still bear simple depictions of mountains, winged serpents, and seaborn rafts. Stony bones of two figures, huddled together. A bone knife. The tatters of a strange knitten tabbard that once held polished bronze discs.

The basement of this complex is an open space, containing many basins of faintly glowing green goo. You really have to weave around these basins to get across the room, not what you'd want to do while someone threw stones at you. I don't know what this goo does to you, but I know it requires a save vs. death.

Come autumn, the strange folk return, Storm's Eye full of partisans and and Becalmer, a line-zoa containing a prominent agtree judge and her family. They come to seize the Eye or anything discovered in the underground complex through traditional law. The line-zoa cannot legally port without permission of the island, since it is a war-ready vessel.

The agtree judge, Uden Baptizer, is widely recognized as impartial in matters of justice, though she has a tendency to exile those who attempt to subvert her.

The Order of the Eye is of occult origins, but claims to have studied miracles in God's whirlpools for well over a thousand years. They set themselves against Resativa, a body of unconscious beliefs which people have little power to change and which promote egocentrism. They come from the Vergarites, but are not initiated into the deeper mysteries of that sect.

They tend to leave out the tale of their origins, for it betrays their great weakness. Concealed beneath their robes, each has a great eye filling their chest, and it is this eye which controls their body, save for their head and neck which is controlled by their heads. This is why they narrate their actions and are seen as clumsy-- their head must tell their chest-eye what is before them. Each carries a walking staff to feel their way forward as well, but are careful to conceal this intent from outsiders. 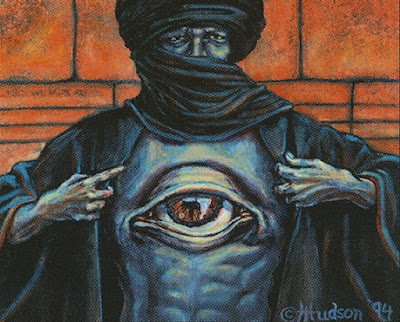 Each member of the order is tyrannously strong (Str 18, etc.), but in combat take penalties for being blind, even as their head mutters directions.

ThAKNHSThA, Abbess of the Eye: Sanx Cleric 2/Magician 1. Hers is a common acronymic name. It is short for "The arm knows not how sure the aim." Knows the spells Eye Lasers, Snakelike Jaws, Viscerakinesis, Iconoclasm, and Jeremiad.

Körwşi, the Flesh-Rimed Beholder: Nephil 3/Juggler 2 (obsession: mourning). Was imprisoned by the ancient wanderer Aygerim, with whom he did battle. On his heart is tattooed the image of his partner, who was killed in the Titanomachy. Ever since he died, the beholder swore that nothing good was left in the world. He remembers on which island his tons-heavy armor and spear are, and may trade their location as a bargaining chip or send any peons acquired to seek them out.

Mega, lover of Teodor: stats as Teodor. The youngest of ten older siblings, all of whom would avenge him. In fact, given his mouth they probably expect to avenge him at some point.

Safira, lover of Teodor: Malsani green pilgrim 1. Good at working up domestic animals into a frenzy.