(This owes obvious homage to the masked clerics. Thanks to the many folks of the GLoG discord who offered thoughts.)

The collared clerics are successors to Uden, the first Priestess, who was herself taught by the goddess Socu. The goddess make a sea worth living in, and Uden taught us the way to live on it. Neither intended that we should suffer through terrible winters, to brave cold winds and watch our animals die. Your people have generally accepted that it is their lot to suffer, but this is not set! In the temple, in the banquet hall, in the deeds of good women and the words of wise judges, the collared cleric sees the potential for the old teachings to save us from new woes.

The laureled clerics are the descendants of those who crossed the ice into Acmori, to bring life to death. The god Dodkul favored the city of Sacrum with thews, lore, and grace, and entrusted you with an essential task. You must go to the graves of the world and prepare them through your peoples' rites, that the bodies of those in the afterlife can also rise, to live as the Righteous Dead. A time of fire is coming, a time that the living cannot endure alone. 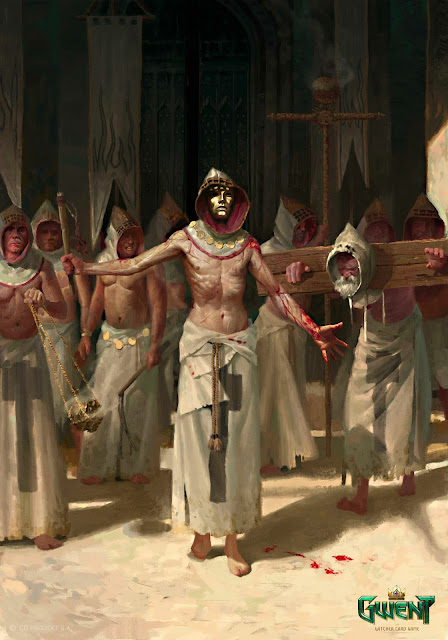 A collared cleric is likely a Socu-worshipping woman from among the Damdar, Stani, or Sanx peoples, nominated by her temple and appointed by her ruler.

A laureled cleric is likely a Dodkulist man from among the Sanctides, Viroj, or Malsani peoples, chosen by the entirety of the clerical conclave.

Their particular sect furnishes them with certain religious strictures, access to potent spells, and further equipment.

Starting Equipment: a staff, a wrath, a robe, a garlic clove, a sack, some twine, and a dose of wine, as well as a sectarian symbol.

Cantrips: You can make a fire by shouting prayers over a pile of wood. You can tell if an object is aligned with or against your god. You can psychically wrestle other clerics and magicians.

Ordained: You are a member of a specific social class. People will make assumptions about you and your behavior. They will support you or oppose you based on the disposition of your order.

Sectarian: Choose a sect from the list below. You are familiar with two spells taught by your sect's temple; they are randomly determined from a curated, secret list. If you are achieving a victory for the main tenet of your order, roll another MD when casting these spells. Each following level, another sectarian spell comes to you in a dream. You can hold [level] such spells in your head at any given time, switching them out with an hour of prayer. You may learn other spells from scrolls, and discover new sectarian spells.

Each sect binds you to its tenets; failing any of the minor tenets of your order leads to an immediate mishap. Failing a major tenet brings your Doom.

Sentiment: "We sell our children's future when we make war our way."

Sentiment: "First, get rid of the liars. Everything else will start to take care of itself."

Sentiment: "If there must be war, I want it to be my king to decide where it is and who wins."

Sentiment: "Stop making compromises with the people trying to kill you."

Sentiment: "This is the age where we can finally end indignity and misery. There is a plan we can follow to make a heaven in this sea."

Sentiment: "We could have won so easily, but you killed our best chance. The sooner you cease fighting your own rescuer, the less blood there will be."

8. Roll twice. You are the first roll in truth, secretly infiltrating the second.

Sentiment: "The soul of the world is found throughout the world."

Sentiment: "There are secrets which cannot be told."

Sentiment: "Getting right in the eyes of god requires lifelong commitment and sacrifice that most people can not and should not claim."

Sentiment: "Seem not too respectable. Most who do right are only performing."

Sentiment: "Tyrants don't give up power. This is the exceptional case where death alone can treat much misery."

Sentiment: "You will be saved who save others."

8. Roll twice. You are the first roll in truth, secretly infiltrating the second.

Prayer: When adventuring, you can give a fervent prayer and roll an orison die (a d4) once between sabbaths, (i.e., once a week.) On a 4 or higher, something happens.

Get +1 to your roll for each of the following:

If the result is 6 or more, regain the spent die.

Miracle Worker: Choose a spell you are familiar with. It physically changes you in a corresponding way, such as a DIVE spell giving you fins and fringes or a HALLOW spell giving you serene grace. This is pretty cool and NPCs will react accordingly. If it is a sectarian spell, it does not count towards your limit. When casting this spell, your MD exhaust only on a 5 or 6.

Sage: You are visited by a giant of Socu, or a Righteous Dead of Dodkul, and they confide your probity to you. Your soul now has 50% iron resistance. You can spend a season ruminating to learn a Way to Power or to trade one of your sectarian spells for another on the same list.

If you wish, you may take on the mantle of heresiarch, which messes with those odds.