For an exercise of the method laid out before, our GLoG discord server wrote a small hexcrawl we came to call Sungrave, the site of the joyful destruction of an evil sun and a tyrannous titan. You can find it 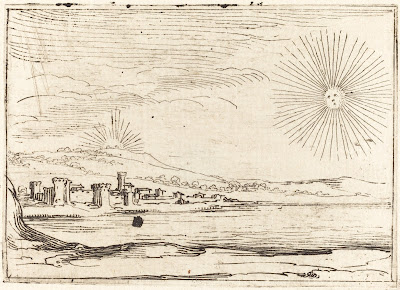 To keep a tight focus on the project, we selected a particular GLoGhack, MARROW, although the experienced can tune it to their own system of choice. I believe it should be fully runnable, except that a DM will have to find or sketch out dungeons to fit into the spots where dungeons are called for. I imagine a party of adventurers being sent into this joyful, treacherous land to find some essential relic now imperiled, or perhaps as vanguards of some force which seeks to set it to order.

As dawn violates the valley, stars are pulled down from their skies,

Like the stony tyrant’s image as his failing foment dies,

And the sun-bleached rows of cities growing fallow, fallen, freed

As lieutenants of new orders spray the rays of gripping greed

Where virtue’s mien was once suggested, vice lies underneath

Hearts no longer flutter. No, a heart is just for beating,

And the tyrant’s figure’s crashing, and the sun is growing, eating,

And the time, I’m afraid, is fleeting.