This is inspired by a think on a GLoG discord server.

Despite the unending variety of classes and character options available to an enterprising system-hacker, there are certain central ability-sets that we find ourselves coming back to time after time. Turns out, "being good at fighting" is a sufficiently desirable skill-set for enough games that people re-invent the fighter. Ditto "solving problems with flashy magic" and the multitude of re-invented wizards.

A selection of many alike options is not always desirable, but neither is a bloodless, generic class line-up. We want a fighter, but one that contributes to the setting, one that asks of us a certain height. It can be meaningful to call your fighter a zouave, even when its abilities are either generic fighter feats or random minor boons. Each of your campaigns can be radically impacted with small changes to the frame of old stand-by classes. Consider:

The Graven Wizard
Mortals born of mortals cannot wield the rudiments of power without implement, so the Great Masters carved their children from stone, making implements with artistry and arete. These were the graven wizards, representations of those gods and kings who never were and never shall be. The Masters are dead now, but in their vanity they taught students, who maintain the schools and keep them separate, and try to curate those wizards who have not left to wander.

Graven Wizards don't get whatever cantrips your wizard school of choice grants and they can't use scrolls or spell tablets. Graven wizards don't study spellbooks, at least not to prime their spells. Instead, they count facets of their power. They don't eat normal food and have no formal place in society.  Cruel and wealthy people won't have compunctions about using them as decorations or to hold up ceilings. Otherwise, the inspired depiction of mortal pain in their creation makes them act with normal mortal vulnerabilities. They sleep, weep, and are tortured by all the usual indecisions.

Equipment: a six-pack, stone paint, a letter of provenance, three days of marble rations, the hatred of artists from all rival schools, and a painfully real set of Motif-Memories.

Cantrips:
1. Eat Worked Stone. If you don't do this regularly, you grow gaunt and dull-minded.
2. Stand Totally Still. Everyone knows that graven wizards can do this, but a DM is obliged to put at least 1d4 stone statues in every dungeon in lands where graven wizards are common.
3. Read Art. Graven Wizards possess a form of prima vedex when observing art-- automatically comprehending the meaning of paintings, sculptures, and the like. Graffiti and children's scribbles yield up only a terse description of what is depicted, but the great masterpieces about which you could write a thesis yield a thesis-worth of information to them.  For instance, a graven wizard who encounters Judith Slaying Holofernes will know not only how it was made, but the story of the motif being depicted as well as the circumstances of the artist who made it. 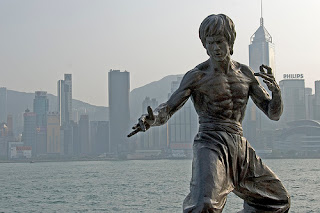