Once, I saw a tumblr post about a dream the writer had, in which the new D&D rulebook had a frog person class but you could only play it in a campaign if you survived a punishingly difficult, long solo dungeon first. Inspired by that idea, I approached Locheil with the proposal to collaborate on a smaller-scale, more reasonable challenge.

You can read the class we made together on his blog, Nothic's Eye.

Below is the short dungeon we made together. It is intended to be a difficult dungeon for a single GLoG PC, but if they survive they will be hopefully be a very interesting PC indeed. While it is intended to be tricky to get through, the DM should use all the typical reaction rolls and other contrivances of chance that they normally would.

First of all, the DM should roll a d12 to see which area the key to the door in area 12  is hidden in. They should also move some things around if the player has read the module, and generally add some unhappy surprises.

Unless otherwise stated, assume that lizard people have lamps or torches near to hand in the rooms which they inhabit. The walls are finely-cut sandstone, and willy-nilly excavations risk small cave-ins.
1: Narrow platform in the center of the room, surrounded by a moat of animate snake-skeletons. You awake on the platform, your current predicament a punishment for trying to flee lizard society. The moat is five feet deep.
2: Warehouse, guarded by a gullible lizard-guard bailiff. They had the manifest for all these confiscated goods, but they ate it. There are twelve barrels, and which barrels have which contents are randomly determined:
3: Room identical to area 1. In the moat is an immense, lazy gila lizard with a poison bite. On the narrow platform is a level 1 lizard person prisoner with her hands and feet bound. She says she was punished for trying to flee lizard society. 35% chance she is a liar and a spy of the lizard ecclesiarchs.
4: Landing with three spiral staircases leading up and several hammocks. A lizard-person bailiff guards the area but in truth he really can’t be arsed if you want to escape. He wears four golden armbands and wields a banded club, and carries a magician’s spellbook he was trying to decipher.
6: Huge sandstone cavern sunken about ten feet down from all the entrances. Along a shelf of the cavern wall in the north, a level 2 lizard-person bailiff sits admiring her three rings— one of gold, one of silver, and one of copper. One of the rings is a cursed ring of lycanthropy, and one is a ring of protection +1, but exactly which is left up to the DM to keep the fun for the player who read this dungeon.
7: Doorway between areas 6 and 7 is locked, with a bloodstained wrist-sized hole in the door. Inserting your wrist severs it but unlocks the door; inserting the key from area 2 unlocks it. This hallway is full of dripping stalactites, as well as an injured mountain lion. If befriended, she will follow her new friend as far as area 12 if able.
8: Deep pool, home to a pair of albino crocodiles. A narrow strip of sand allows passage from area 6 to 7. In the bottom of the pool is a shiny silver chain, a pair of large rubies carved into crocodile heads, and a sapphire carved into a sphere wrapped by snakes.
9: Hall of false doors. 1-in-3 has a haphazard dart trap or gas trap. Flooded to the ankles, due to proximity to area 8. The true door in the western wall has a subtle air current detectable by tasting the air. Hanging from the ceiling in her boots of spider climbing is the unbelievably bright and cheery drow mercenary Thim Bulthwip. She is an enemy to Daur in area 5, and came to the dungeon to mess with him. 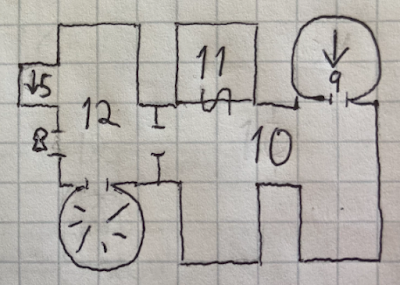 10: Lizard shrine. Cluttered with idols and gewgaws. Disturbing it risks a save vs. lizard curse, in which the trespasser slowly transforms into multiple conjoined lizards. Such an affliction takes place over the course of 3d4 months. A section of brick wall conceals the entrance to area 11.
11: Cache, guarded by an angry Deep Bull that attacks anything which isn’t red, a fact that any dungeon denizen could tell the PCs if they had a mind to. The treasure itself includes a black fingerless glove that turns your index finger into a snake, 300 silver coins, a cool silver ring with a black gem, a stylish bicorne with a cockade, and a shortsword with a brass hilt carved to resemble a gecko.
12. Exit, guarded by Godscale, a very very strong and pious(, and gullible, and pyrophobic) level 3 lizard person. Would just love for a prisoner to make his day by trying to escape. The door itself has a sturdy lock (its key in a randomly determined room, remember), but any PC who manages to get through it counts as having successfully completed the dungeon, and may play this PC in the DM’s game. For future characters, the lizard person class is available to that player, using the starting equipment the DM deems appropriate. 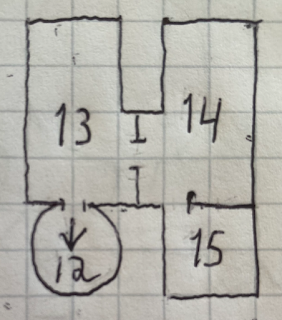 13. Blade shrine, its altar displaying a silvered katar before a peacock feather fan. Its hilt resembles a crocodile head, and if wielded it bites down on its user’s wrist and never lets go. Gets +1 to hit and damage, increased to +2 when used against mammals. Every time it takes a life while uncharged, it becomes Charged. The wielder can discharge the blade to make it weep poisonous tears that cause the next foe it wounds to save vs devices or suffer convulsions and visions for a round.
14. Mold dragon shrine, the lizard peoples’ inaccurate name for this giant snake with a symbiotic fungus colony living on it. The room is full of 3d10 unpleasantly wet silver objets d’art. Interacting too closely with the snake causes one to save vs breath or lose a language spoken and gain a new one.
15. Excess weird jar closet. Each jar is of a different color, and when uncorked has a different effect:
Posted by Phlox at 4/20/2022