Session Report: the Haunted Hidalgo Mine

This last week, I ran my first B/X game (OSE) for my spouse and their parents, neither of whom had ever played a roleplaying game before. The experience was a great learning opportunity for me, and at the encouragement of a couple folks on my GLoG server I've decided to try to write the night up. Generally, I don't care for session reports, so I'll try to keep things lively.

To ground the setting in tropes the players are all basically familiar with, I set the scenario in the Wild West to avoid the difficulty of generating characters, I took the liberty of rolling up three character and allowing the players to choose between them. We've got:

The party starts in Arneson's Claim, the nearest town to a mine that C.C. acquired in an estate sale. They are introduced to such ideas as "now is when you can talk in-character and decide what you do" and "this is how you speak to the NPC shopkeeper as you buy your beans, bacon, whiskey, and lard." These establishing scenes turned out to be important to getting the in-laws their sea-legs. They were happy to have me tell them when to roll dice and what numbers were good, but the structure of a roleplaying scene was harder to grasp for them. When she got the hang of it, my mother-in-law would always smile to me when she transitioned the scene, pump her arms as though speed-walking, and go "yes, and now we're going to this thing--" It's quite charming.
Ready to head out, the party loaded up their mule (tended by C.C.'s hireling Juan-Carlos), and I rolled for a couple random encounters. Fortunately for the party, they avoided the more dangerous encounters like "2d6 wild dogs, see page 39". Instead, they encountered a high-level cleric and his assistants, the Hopi elder Nakwaiyamtewa, who mentioned that the mine they were heading to was haunted by ghosts. This encounter is another piece of good practice for roleplaying, and they purchase a poultice from him. C.C. continues an earlier practice of vague suspicion. Her player operated under the suspicion that any encounter must have some story significance, and took detailed notes throughout the journey.
They then encountered a high-level fighter, Deadeye Davis, and his entourage, who mentioned that the mine they were heading to was haunted by ghosts. I note that wilderness encounter tables in OSE have a lot of high-level NPCs with character levels, and that they generally are not restricted by expected level at all. Davis shoots a commemorative medallion for them that is inscribed with the phrase "Deadeye Davis shot this on the first try" on the first try. Rather than buy it, as Davis suggested, Dirk Pitt traded some beans and whiskey.
Finally, they arrived at the mine, as well as a cracked adobe house close by. Juan Carlos began to set up camp (not entering the house for whatever reason) as the party approached the mine. They sent Dirk Pitt into the darkness, trusting to his miner's darkvision. Entering the first branch he sees, he finds a sleeping, sweaty fellow taking a break from digging a hole with a chest close by. Pitt wakes him with a revolver in his face, and commands him to jump into the pit. The man, Terrence, begins to babble about how he's got a wife who would miss him and many orphan wards. This generally amuses the party.
Pitt calls back to the party to come help him, also alerting a trio of bandits in another branch of the mine, unbeknownst to them. This leads to a great show-down with Dirk and James clutching the only light source, standing over Terrence, as three bandits in the dark threaten them with their firearms as C.C. quietly approached from the mine's entrance. She attempts to cast Charm Person on the apparent source of the threats, but the bandit leader succeeds on his save. When the party lets slip that she is the deed-holder for the mine, the bandits attack, but have a hard time locating her in the dark. As she flees, Dirk extinguishes the lantern so only he can see, and with James firing blindly into the corridor they manage to kill two of the bandits. The other has already fled to the surface, chasing after C.C., and when they are in the light of day he fires a shot through her shoulder. I told my mother-in-law she would need to make a save vs. wands or be incapacitated by the gunshot, but with luck she succeeded. Juan-Carlos was able to subdue the bandit with a frying pan, concluding the encounter.
The party ended with one gunshot wound, two captives, and a chest. As James checked out the house alone, Dirk twisted open the chest latch, causing a golden snake-carving to shoot forward from within and jab him with a poisoned needle. Luckily, he passed his SAVE VS DEATH, and his hand merely swelled up painfully. Within were hundreds of gold coins and nuggets, recovered from the mine after it shut down under spooky circumstances.
In the courtyard of the house, James found a set of key-chimes, which he carefully dismantled in case someone heard it. (DM's note: seems like a bad idea, like the presence of a set of chimes would not be suspicious to anyone in the house and its absence could be, but whatever.) After clearing the house, the party set up camp there, and C.C. suggested sleeping in shifts to keep an eye out for trouble. I was quite pleased to inform the player that this is standard operating procedure for many groups, and that she should be proud of herself. 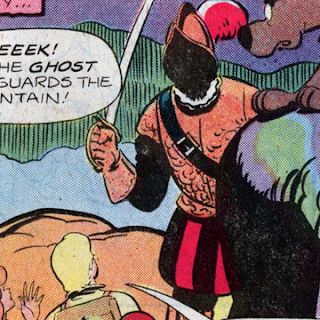 In the second shift, Juan-Carlos was on watch. His scream woke the rest of the party, at which point he warned that a ghost had arrived and told them to get out. They loitered until they saw this ghost, a fellow speaking English in a silver conquistador costume. James shot this ghost, causing the man to fall to the ground blubbering about how the other bandits had forced him to impersonate a ghost to scare away scrutiny.  He was tied up with the other prisoners.
In the morning they returned to the mine. C.C.'s player was simultaneously hopeful to recover HP and surprised by how little her gunshot seemed to impede her. Scouting about, they found the bandits' camp, but despite some light searching did not find a treasure (bonds and confederate money) hidden under a pile of rocks. Continuing on, they encountered the true ghost of Paulos Hidalgo, the original owner of the mine. They could tell he was a real ghost because he spoke Spanish and was see-through. He cursed them as English swine and told them to get out. After offering to help him if he would help them, he staggered forward, holding out a ghastly limb. Dirk.... hugged the ghost. He took 3 constitution damage, complaining that he was being punished for trying to be nice to an NPC, as I rerolled the reaction roll of the ghost in light of this tact. Sure enough, this mollified the ghost somewhat, and he told them to look behind "the sign of God" before sinking into the floor.
They decided to continue on, where they saw ghosts of long-dead workers tearing at each others' flesh with mattocks and shovels. James and Dirk, failing their saves, fled screaming from the mine, leaving C.C. to walk after them. On the way back, she noticed a small cross carved into the wall. When the party regrouped, they returned to that cross, and Dirk noticed that the wall in this spot had been added, not simply carved through. This was the result of his inspection despite a failed 2-in-6 roll, and in retrospect calling for a roll was a mistake on my part.
Pulling the false wall aside with a crowbar, they found a skeleton and a locked chest. Retrieving both, they buried the body and James gave his best attempt at a Christian eulogy, propitiating the spirit and allowing Hidalgo to rest. They attempted to pry the chest open but failed, but after searching the key-chime found earlier Dirk used a silver key to unlock it, this time opening it with a crowbar to avoid any traps. Within were thousands of Spanish gold coins, pieces of polished turquoise, and jewelry of various descriptions. Truly, enough wealth to last one person their whole life long. Though I subtly hinted they could turn on each other to take the treasure for themselves, no one was close to biting, and they returned to town with wealth and prisoners. The party was wildly successful in their journey to the Hidaldo Mine.
Lessons Learned
Posted by Phlox at 9/07/2021