(Note: this is an expansion on notes by our beloved Deus. The formatting,idea, and much of the text is theirs. Other ideas were contributed to them by the likes of Vayra, Xenophon of Athens, purplecthulhu, and rtx.)

ONCE upon a time, there lived a man who had a son—a lazy, stupid boy who would never do anything he was told...

ONCE upon a time, there lived a King and Queen whose children had all died, until only one little daughter remained...

ONCE upon a time, there was a peasant whose wife died, leaving him with two children— twins— a boy and a girl...

ONCE upon a time, at the town of Senna on the banks of the Zambesi, was born a child. He was not like other children, for over his shoulder he carried a big sack, and in his hand an iron hammer. He could also speak like a grown man, but he was usually very silent...

ONCE upon a time, what happened did happen, and if it had not happened this story would never have been told... 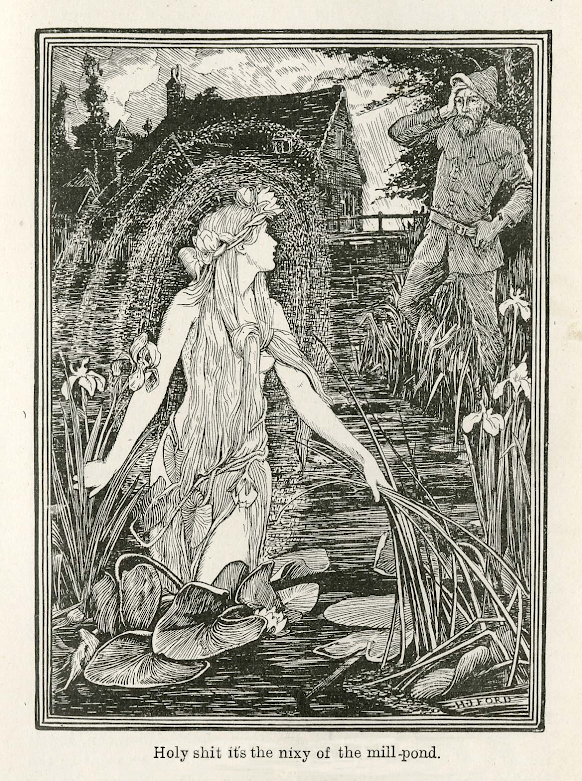 You are a normal person in every way, Your godparent, however, is something weird. After being turned out of your home (or orphaned) you have taken to the road.
A godchild can use light armor and shields and never fumbles while using bows, slings, clubs, hatchets, knives, named swords or anything you took off the body of a dead giant.
Your godparent will offer you the best advantages they can, though beyond that you will have to manage as best you can.


Kens (d3): 1. Shepherding 2. War 3. Ingratiating yourself to authority.
Starting Items: sturdy traveling clothes, three days of food in a sack, a hatchet, and one Thing to Remember Your Parents by.
Godparent
Your parents, desperately poor, selected a godparent who seemed to offer you the most potential for advancement. Roll on the following table to determine your godparent, and then roll on their subtable at every level:
Things to Remember Your Parents By
Posted by Phlox at 11/19/2020

Email ThisBlogThis!Share to TwitterShare to FacebookShare to Pinterest
Labels: GLOG